“Beating the stock market is easy. I've got all the tools and data needed to make the next winning trade.”

— said no one ever


The financial markets are a complex and opaque system to navigate. Historically, only a small minority of well capitalized investors (e.g., hedge funds, institutional insiders) have had access to information and tools to outperform the market. The vast majority of investors often find themselves on the losing side of information asymmetry when strategizing their next trade.

At the same time, the power and impact of internet communities has reached a critical inflection point. Entirely new cultural and economic movements have emerged by disrupting financial systems that are stacked against the retail investor and exposing the borderline corrupt foundations of legacy systems.

Alpha Vantage Coin (AVC) is a dual-purpose utility and governance token that seeks to invert the existing model of Web 2.0 based systems and empower ALL financial market participants to access high-quality market intelligence and formulate informed trading strategies.

Unlike legacy systems in which application code is closed-sourced and opaque, AVC’s code is open source, transparent, and can be integrated in a permissionless manner within the Ethereum ecosystem. Rather than having user profiles be stored and exploited on a centralized server, user profiles are private/public key pairs owned by the user.

As an Ethereum-based ERC20 token, AVC enables its holders to: 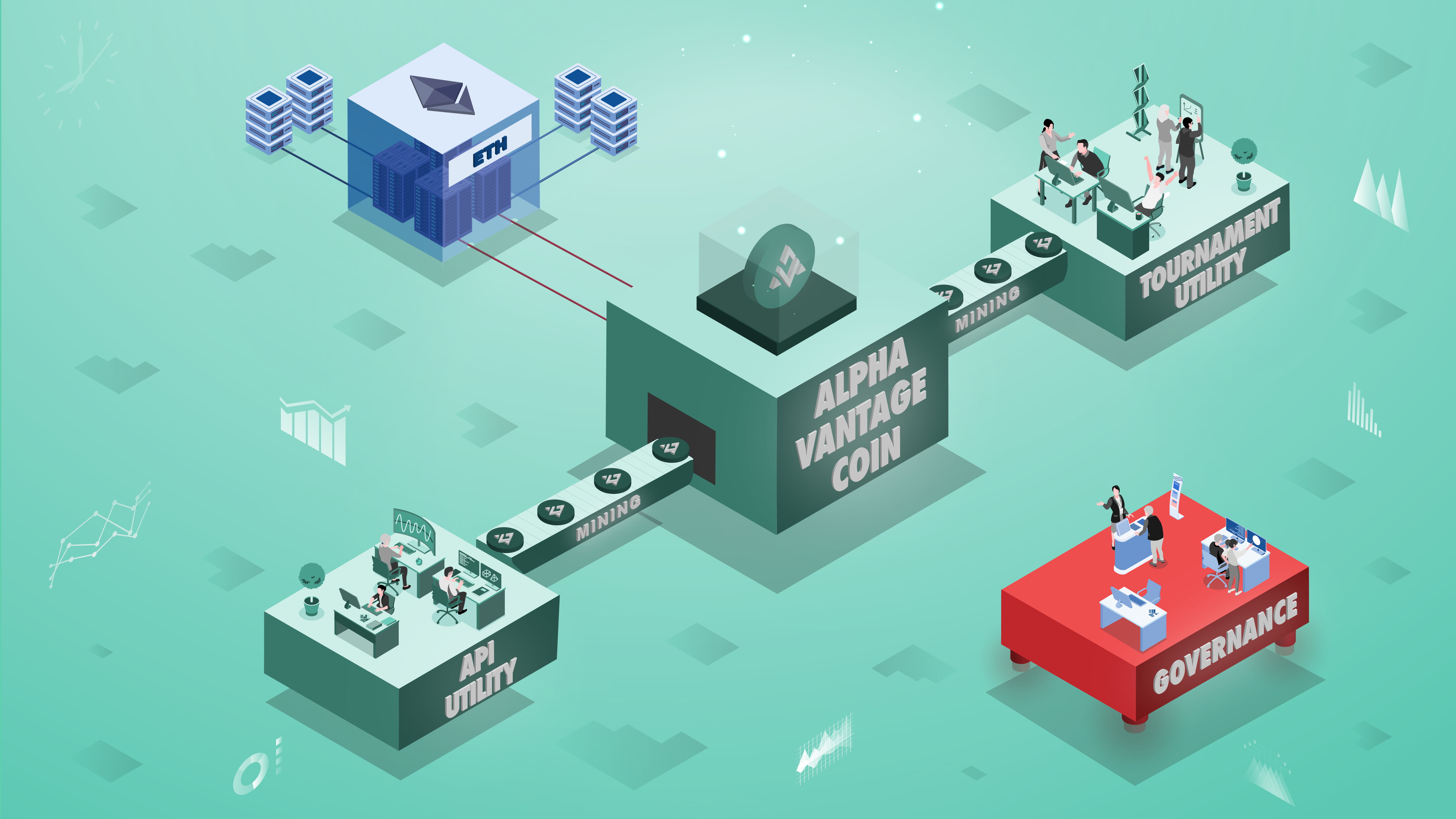 AVC holders can exercise various utility & governance privileges within the AVC ecosystem, including:

AVC holders can access the Alpha Vantage APIs for up to 5 data requests per minute with NO daily rate limits (non-AVC holders are capped at 500 requests per day). The Alpha Vantage APIs include over 80 financial and economic datasets that are commonly used by institutional investors for trading strategy development. AVC holders have the full flexibility on how to query the API service - be it through the cloud or from a spreadsheet software such as Microsoft Excel or Google Sheets.

AVC is a community-based project. AVC holders can vote on key product features and roadmap of AVC, Alpha Vantage APIs, and the Alpha Tournament as long as they have a connected wallet with AVC tokens.


In addition, at least 10% of total AVC supply is reserved for external contributors to the AVC community - including content creators, community administrators/moderators, open-source software developers, and other voluntary contributors.

Unlike most cryptocurrency mining paradigms, AVC mining does NOT require any computer programming skills or specialized hardware. All you need is internet access and a passion for the financial market. Check out the AVC Mining Guide for a detailed breakdown of the token economy and mining process.

The AVC Project is born from Alpha Vantage Inc, a Y Combinator backed, Harvard-incubated technology company that provides cloud-based financial market data to millions of quantitative traders, data scientists, and software developers around the world. The team is comprised of thought leaders, researchers, experts, and technology executives at the intersection of finance, artificial intelligence, and blockchain technologies.

Olivier Porté is co-founder and CEO of Alpha Vantage and sets the vision and strategy for the company. Prior to co-founding Alpha Vantage with fellow MBA classmate Steve Zheng in 2017, he worked in various capacities in finance at Morgan Stanley and Mitsubishi UFJ Financial Group (MUFG). He is an alumnus of Y Combinator (S18) and received his undergraduate and graduate degrees from Harvard University.

Efrem Sternbach is an experienced capital markets professional with expertise in data management, financial engineering, trading, hedging and risk analysis of portfolios in senior leadership capacities. He has worked at both sell-side and buy-side companies, and is currently working to democratize access to financial data. Efrem received his doctoral degree in Physics from the University of California, Berkeley.

Don Dodge has held senior leadership positions at leading technology companies such as Google and Microsoft. His last executive role was in the Developer Advocacy capacity at Google, where he helped developers build applications on Google's platforms, as well as helped venture capitalists and start-up companies work with Google.


And, most importantly, you!

Join us for the blockchain revolution to make the global financial markets fair, transparent, and decentralized!